Aeneas on the Subway

In Roman mythology, Aeneas was a mighty hero and son of a goddess who traveled to the underworld. He later became a god himself. Here we see a modern-day Aeneas on the subway, traveling to parts unknown.

I found him on another blog. Little discoveries like this are as joyful as they are annoying, because you're happy to find a beautiful man but agonized to know you'll almost certainly never see any more. Somewhere, he lives a full life, and your world and his will never intersect.

I'm wondering if this modern-day Aeneas is an off-duty fireman on his way home to the missus after a long shift. If he looked up to catch you spying on him and you are a beautiful woman, he would grant you an ellusive smile. But if he caught a guy looking, he'd stare you down with his steely eyes until you turned away, embarrassed and ashamed but also secretly thrilled for this morsel of interaction. He is a god, after all, and you and I are mere mortals. 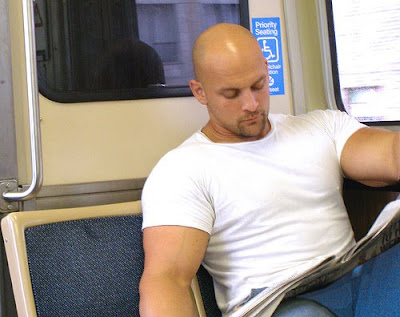