Join me on another little jaunt down memory lane. I was a college freshman in 1985. I was slim, had probably close to zero body fat, and looked young for my age. I was also on the shy side. Given this was my first time living in the big city, I made friends slowly. My jock roommate was cordial but had no apparent interest in welcoming me into his circle of jock buddies, although he was impressed I had been varsity and all-state track.

I spent much of my study time in the library. I first used the undergraduate one but soon discovered I liked the graduate library better. I would take breaks from studying and wander through the various floors and stacks looking randomly at books and magazines. This was in the day when libraries still kept many old magazines bound in big volumes.

One weekend afternoon I was on an upper floor exploring a remote section with old books, mostly from the nineteenth century. I turned a corner and a good-looking young graduate student was just standing there with sort of a shit-eating grin on his face. He was instantly friendly and my first thought was that he belonged one of the religious cults that were extremely aggressive in recruiting at the time. I mumbled some kind of response and left the area quickly.

A few weeks later I found myself exploring in the same part of the library. I wanted to look at the old books again. I returned to the remote portion and saw two young lads kissing in the stacks. They noticed me, nodded a silent greeting, and went back to what they were doing. I was both deeply embarrassed to have interrupted them but also secretly fascinated at what they were doing.

That night in my room I put two and two together and wondered if I had stumbled on some clandestine gay hookup spot in the library. This was the mid-eighties, when gay young men still pretty much kept things quiet about their sexual identity. If a gay student group existed on campus, I never heard of it. And, given this was before the internet age, there was no such thing as going online for answers.

I decided to try visiting the same section of the library again. Alas, no one was there but I did enjoy looking at the old books. Some days later the idea hit me: maybe I was trying too early in the day. Perhaps if I went up to the remote stacks at, say, close to midnight, I might discover something.

I planned a particular night after an important exam and looked forward to it eagerly. All I could think about was what might happen. I had some gay sexual experiences in high school but nothing yet in college. I managed to ace the exam notwithstanding the distraction but then had hours to kill before my late-night attempt.

The day passed slowly, but the time finally came when I returned to the remote stacks at the late hour. Some nine or ten young blokes, mostly graduate student age, were hanging out in the nineteenth-century books. Given I had never been there before, I was warmly welcomed. I remember one was really pushy and I took an immediate dislike to him.

Another lad really caught my eye, smiled, and just beckoned "let's go" with his head. We were back in his single room before I even knew his name. We were already half undressed when I managed to tell him mine. That night was particularly memorable for me because it was really the first time I was with a man who knew how to handle himself (and me) sexually. Prior to that date, I had either hooked up with other inexperienced guys my age or closeted small-town men in their twenties who approached gay sex with a certain cautious timidity. 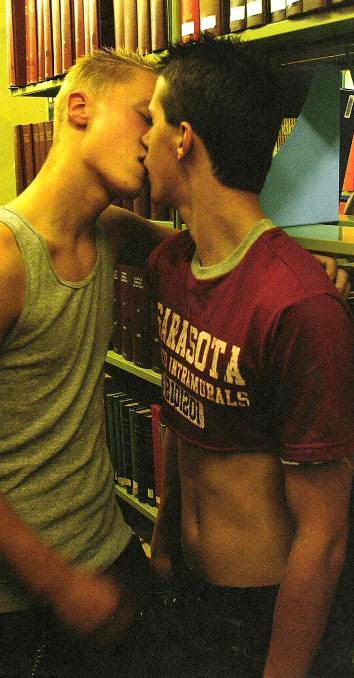