The eclectic and always interesting The View on Superior featured this stunning amateur shot earlier this week. I'll cut to the chase -- this guy really does it for me.

I could write a novel about how I met him, the straight AWOL jarhead I picked up hitchhiking. I allowed him to stay in my house. I pampered him whilst neglecting my work just to cater to his whims. He swam in my pool all day and lounged around reading and watching television.

He was quite taciturn at first, but with time I was able to draw him out in conversation. I became his sounding board, his confessor, his friend. Thanks to the mysterious alchemy of lust, something in him awakened, and he wasn't so straight after all. It all started that day I accidentally walked in on him in the bathroom when he was about to step into the shower. There was something in that look. His reticence blossomed into desire. His cock twitched as it hardened slightly.

"Wash my back, would you bud?" he asked in his quiet voice. It was the ending and the beginning at once. We robbed our first bank the following week. 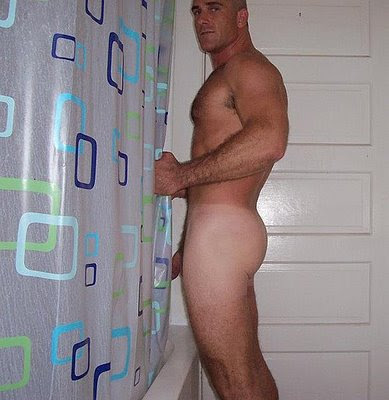