Fitting together some clues from this picture, I'm guessing these were taken in his bedroom in a larger flat he shares with several of his mates. The posters taped to the wall suggest he's recently out of college and still too poor to have a nice place of his own. The dirty laundry tossed on the floor tells me he either has a steady, tolerant girlfriend who doesn't care about his mess or he doesn't date much, because he doesn't worry about bringing a lady friend back to his messy room.

He could be in graduate school. I'm guessing he's around 24 and about 6'2", given his height compared to the closet door. His mum bought him the matching spread and towels. The room has that stuffy male lair scent. Watch where you walk, because he leaves his barbells lying in the middle of the floor.

The pictures are much larger than these previews here, so be sure to click on them to see him up close and personal. 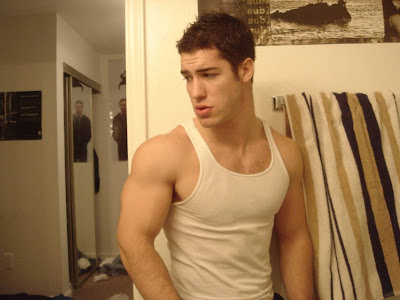 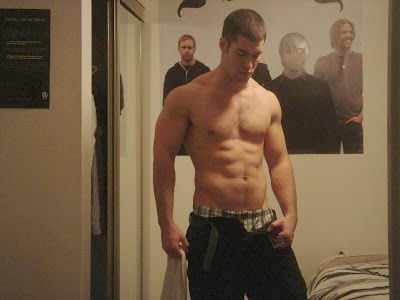