This picture appeared in the June 1980 issue of Mandate. I saw it a few years later when I was about thirteen or fourteen.

Some mates and I were inside one of those large roll-away dumpsters the size of a railroad car where everyone in the community took newspapers to be recycled. We lads would carefully sort through the exposed contents, ostensibly to keep it sorted and neat, but really because you could find all sorts of naughty magazines, from tame Playboy to the hardest of the hardcore.

The other lads liked to look at hardcore for the women, but I secretly looked at the men. The sight of muscular blokes with enormous cocks thrust into various orifices filled me with all sorts of excited confusion.

This picture lodged forever in my memory, because indeed the June 1980 issue was part of the haul. After seeing this, I dreamed of going to California, where you could find pools full of naked men like this. A few years later, I headed off to the Golden State for college, where indeed I saw there were gods everywhere.

Be sure to click on the photo to see it full-sized. 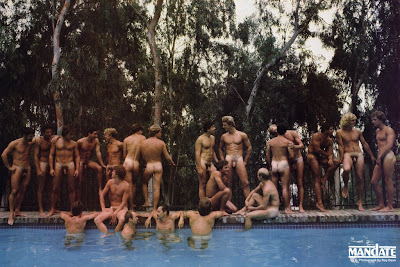